Warning: A non-numeric value encountered in /home/majeskia/public_html/perspectiveonathletics.com/wp-content/themes/Newspaper/includes/wp_booster/td_block.php on line 1009

Ivy League football coaches have decided to take the extraordinary step of eliminating all full-contact hitting from practices during the regular season, the most aggressive measure yet to combat growing concerns about brain trauma and other injuries in the sport.

The move could influence how other football programs, from the youth level to the professionals, try to mitigate the physical toll of football, which has been played on Ivy League campuses since the 19th century.

The eight Ivy League coaches unanimously approved the measure last week. Their decision is expected to be adopted formally once it is affirmed by the league’s athletic directors, policy committee and university presidents. The new rule would be in addition to the Ivy League’s existing limits on the amount of full contact in practice during the spring and preseason, which are among the most stringent in collegiate football. 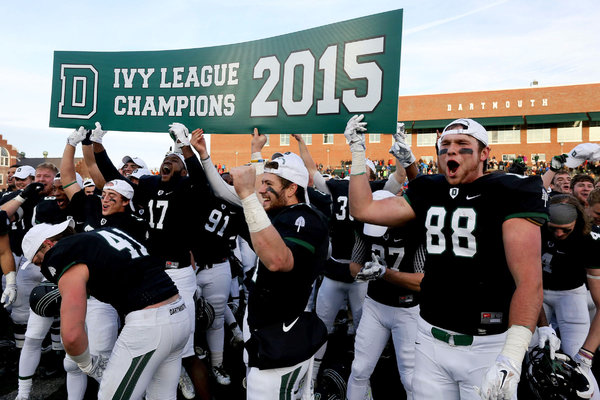 Dartmouth shared the Ivy League title in 2015, which helped to legitimize the methods of Coach Buddy Teevens, who eliminated full-contact practices throughout the year starting in 2010.Credit: Geoff Hansen/The Valley News, via Associated Press

The research on limiting full contact in practice “all shows that you not only have fewer subconcussive hits, but also concussions,” said Dr. Robert Cantu, the co-director of the Center for the Study of Traumatic Encephalopathy at the Boston University School of Medicine and the medical director of the Concussion Legacy Foundation. “It’s not rocket science.”

The Ivy League’s new rule was inspired by one of its members, Dartmouth, where full-contact practices throughout the year were eliminated by Coach Buddy Teevens starting in 2010 to reduce injuries, including concussions, that kept players out of games and wore them down over the course of a season.

At first, some players and coaches worried that they would lose their competitive fire, Mr. Teevens said. Instead of hitting other players in practice, Dartmouth players hit pads and tackling dummies, including a specially designed“mobile virtual player” that moves across the field the way a player would.

“At this stage in their careers, these guys know how to hit and take a hit,” Mr. Teevens said in a phone interview. “People look at it and say we’re nuts. But it’s kept my guys healthy.”

The Ivy League — which consists of Brown, Columbia, Cornell, Dartmouth, Harvard, Pennsylvania, Princeton and Yale — has been one of the most aggressive college conferences in addressing the risks associated with the collisions that are endemic to the game. In 2011, the league sharply reduced the number of full-contact practices teams could hold, going beyond the rules set by the N.C.A.A. at the time.

“We’re not trying to change the nature of the game, we’re just trying to make it safer,” said Robin Harris, the executive director of the Ivy League.

The league also reviewed the rules governing men’s and women’s hockey, lacrosse and soccer to determine if there were ways to reduce hits to the head and concussions in those sports. The league is also looking at rugby and wrestling.

Leagues from Pop Warner to the N.F.L., sometimes reluctantly, have also restricted the amount of contact in practices, when many concussions and other injuries occur. Coaches across the country have eliminated the Oklahoma Drill and other techniques that require that players butt heads.

Dozens of states, which govern public school athletic programs, reduced practice-field contact, something advocated by Practice Like Pros, a group that promotes less contact in practices.

Terry O’Neil, who runs the group, said that only 3 percent of concussions sustained in the N.F.L. occurred on the practice field; in high school, the rate is 60 to 75 percent.

Groups like the Ivy League, which have limited full contact in practices, “have been forced to improvise and innovate without full contact to the point where they are so comfortable with it, they vote to eliminate full contact completely,” Mr. O’Neil said.

Some youth leagues have gone even further to reduce the risk of head trauma. The Boys & Girls Club in Marshall, Tex., for instance, shuttered its tackle football program and focuses more on flag football.

The N.F.L. now allows 14 full-contact practices during the 18-week regular season, though some teams never reach that limit.

The N.C.A.A. guidelines are more permissive. Teams that hold two-a-day practices can have full contact in one of them. Full-contact practices are allowed up to four times in a week, and a maximum of 12 times during the preseason. During the season, teams can hold full-contact practices no more than twice a week.

Mr. Teevens said that his restrictions on full contact in practice helped reduce the number of concussions his team sustained to just a handful each season from about 20 a year before full-contact practices were eliminated. The number of neck, back and shoulder injuries also declined noticeably, he said.

“You’d have more stuff occur because we were banging each other,” he said.

Mr. Teevens said that contrary to some fears, his players have become better tacklers. Players still tackle from 500 to 800 times a year, but instead of launching themselves at other players in practice, they focus on how they tackle to avoid head collisions. The number of missed tackles in games has fallen by more than half, he said.

“It hasn’t hurt our level of play,” he said. “It’s actually made us a better team.”

In the past three seasons, Dartmouth has finished third, second and tied for first in the conference. Other teams paid attention to Mr. Teevens’s methods. “Winning the championship this year legitimized it,” said Mr. Teevens, who coached at Dartmouth from 1987 to 1991 and again since 2005. He coached at Tulane, Illinois, Florida and Stanford in between.

Getting other college conferences and leagues to follow the Ivy League’s lead may take time. When the N.F.L. limited the amount of contact in practice, some players complained that it would undermine their competitive drive, even though they recognized the benefits of the measure.

“Sometimes I do miss the old live contact practices because they simulated game conditions and helped you prepare for the real thing,” Cullen Jenkins, a Giants defensive tackle who has played 12 years in the N.F.L., said last season. “Then again, some of those practices could be pretty tough and exhausting, so I don’t miss that at all.”

From a medical perspective, the benefits have been unequivocal. One study by researchers at the University of Wisconsin found that a statewide rule that prohibited full contact during the first week of the season, and limited full contact to 75 minutes during the second week and to 60 minutes per week in the third week and beyond, had an immediate impact.

The rate of concussions sustained in high school football practices in the state, based on a sampling of high schools, fell by about half after a rule change in 2014.

“It’s verification that this approach is a way to make the game safer,” said Alison Brooks, an assistant professor in the department of orthopedics and rehabilitation at Wisconsin and a co-author of the study. “It is a real effect of the rule change.”

NCAA Commits to Inclusivity in Response to Letter from LGBTQ Advocates

Cal to Pay $4.75 Million to Settle Suit in Football Player...